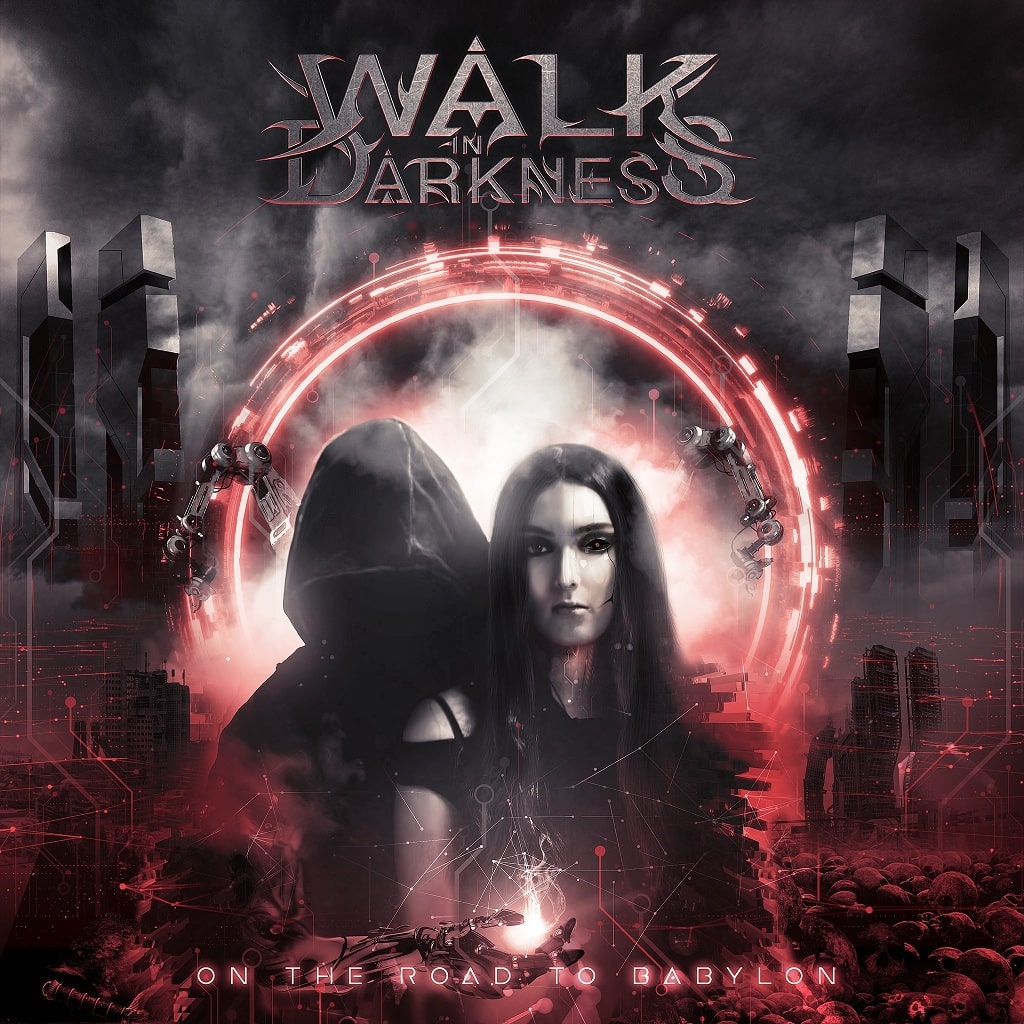 I’ve heard about Walk in Darkness in the past and for a while I was under the impression that they’re just another symphonic metal band, falling into predictable patterns, not that I’d have a problem with that. However, upon checking out their latest single “On The Road to Babylon”, I was quite pleasantly surprised to hear growls, and guitar riffs that seemed to draw a lot from doom metal. It’s quite rare that I find doom metal I actually like and want to dig deeper into but this was one of those songs.

The actual style of the album turns out to be neither symphonic nor doom metal as such, but a skillfully refined blend of the two, along with gothic flavors and a few other influences. The songs are slow or mid-paced and come in waves between soft, melancholic atmosphere and crushing down-picking riffs. I was pleasantly surprised by the guitar parts on this record, very fluid, creative, but also heavy and impactful, allowing for some diversity that keeps things interesting. The genres used on this album have never been much about creative riffage but the guitars here are actually very present, powerful, sometimes even technical and I could mention a bit of a progressive influence as well (see syncopated rhythm in “Walk on The Sky”). For music that is otherwise quite lyrical and atmospheric, I find this punchy, rhythmic, almost marching sound to the riffs and drums essential in making it appeal to a broader range of metalheads, and also in expanding the band’s sound and attitude. The guitar solos are very emotional for the most part, shining clearly through the soundscape with beautiful melodies. I also find myself taking notice of the drums on many occasions, tender and detailed on the softer moments and headbang worthy when the riffs get going. There are cool double bass sections and some really impressive transitioning and accents keeping a tight link between different musical phrases or creating flamboyant moments that really take you by surprise.

On the calm end of their sound, we find clean or acoustic guitars, soft piano or various keyboard sounds and an overall mysterious, dark and melancholic atmosphere. The transition between heavier and softer sounds may be gradual or abrupt but it is always fluid and coherent, due to elements of one sound fusing into the other. I feel that’s where the spark of this album lies, in the clashing and blending of opposites. This is primarily due to the vocal performance. Nicoletta Rosellini’s voice is for the most part calm, soothing, and adds a soft, silky texture to the sound that creates a surreal sense of comfort and somehow keeps the instrumentation tames beneath it, like a veil numbing the aggression that would otherwise strike you head first. Same holds for the keyboards that often wrap the metal elements in a somber ambiance and an aura of mystery. There is also consistent use of growls that may come in full power or may be muffled into the background allowing the clean vocals to soar. The cleans may also provide background when the growls take the spotlight, or both vocal styles may come on full display at the same time. This blending and clashing of soft and corrosive textures creates a very immersive feel and satisfies contrasting emotional tendencies simultaneously, which I think is part of what makes this album so engaging.

I have looked into the concept of this album, and then the form of expression that they have chosen makes even more sense. The album presents a futuristic post-apocalyptic world where humans and machines somehow became intertwined, with our nature of life having been gradually extinguished. The lyrics as well as the music both express this in a very artistic way. There’s use of sci-fi motifs and technological, computerized imagery clashing with outbursts of raw emotion and mentions of nature, life and dreams as if they are something long lost. Sound design and textures also play a huge part in presenting this concept, as there’s a raw sound to the guitars, muddy growls and drums, which can be seen as the expression of the natural world. As mentioned previously, these elements seem tamed, or maybe numbed out under the clean vocals and keyboards. This evocates a sense of suffering and longing as well as stasis. As the album progresses, both tension and numbness somehow seem to gradually increase. The piano and keys have cold, distinct metallic sound, and the album goes more and more towards modern, electronic sounds. There are moments when we hear monologue voices of news reports or similar atmospheres, evoking the imagery of giant screens in over-developed urban areas with little to no nature left, as humans pass their everyday lives in silence and apathy.

I have to admit, this album shook me a bit. The concept is definitely one that gets you thinking and the accuracy and depth to which it is expressed definitely leaves a mark. The closing track “Critical System Failure” really got to me as it is the most modern, flat and lifeless in terms of sound, with the electronic elements taking hold a lot more than in any other songs, but the lyrics mention of an inner spark that keeps returning and refuses to be put out. Will our humanity be buried under patterns and screens, or will we find our way back home? Well, I guess it’s up to us to decide.